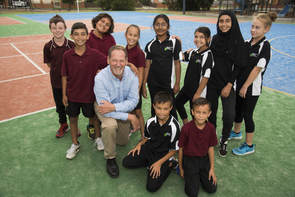 S.O.L.E. Australia is pleased to announce that Paul Kenna is one of 12 inspiring teachers and Principals from across Australia named as a Teaching Fellow in the 2018 Commonwealth Bank/Schools Plus Teaching Awards, Australia’s largest award of its kind for educators. This is a significant achievement for Paul as there was a rigorous and comprehensive selection process with over 1,000 nominations from across the country.

Secondly national recognition for "an innovative classroom inquiry strategy" S.O.L.E. (Self Organised Learning Environments) The award recognises the ongoing partnership with Mr. Brett Millott for the development of the S.O.L.E. Australia strategy.

The Federal Minister for Education and Training, Senator Simon Birmingham and Mr. David Gonski AC, presented Paul with his Award in Sydney on Friday 23rd March, at a ceremony attended by guests from the education, business and philanthropy sectors.